Perhaps you’ve been watching the amazing Neil deGrasse Tyson on the Cosmos television series? Last night, he touched on the fact that stars have long been used as a calendar, indicating when new seasons are around the bend [get planting, you!]. Certain constellations are tightly tied with seasons–such as Orion and Winter.

This winter, I’d been fussing about how slowly Orion moves. He’d climb over the eastern mountains, dangle over the Golden Gate Bridge [from the Marin Headlands, of course], and all and all, be a slow poke about his waltz across the sky. My impatience, stemming from the fact that I don’t usually look at the winter night sky, kept growing. It’s so difficult to live in a place where the temperature is mild year round [Ha! But I don’t ever feel warm.]. We made several trips up to Kneeland, a patch of human-created prairie where the astronomy club meets, this winter to stand in a forest of telescopes and gawk with like-minded folks and only encountered nippy conditions, but no frostbite.  To me, looking at the stars says very loudly SUMMER! My brain, in that warm, wind-swept prairie of South Dakota-mode, wondered why long underwear was necessary, and why the stars weren’t as familiar. Sirius? Isn’t that some form of radio?? Aldebaran? Don’t you mean Altair? And who is this Orion fellow anyway? Hercules! Hercules! [In my defense, my star gazing occurs between the hours of 9 and 12 pm–no early morning viewings for me, hence the missing the “other” part of the sky.]

So last night, after what feels like a long winter [probably since there was hardly any rain–hardly a winter!], the Big Dipper pointed to two bright stars [and one planet] creeping over the eastern mountains–Arcturus and Spica [and Mars–that’s a story for another day]! Summer stars, the stars I’m most familiar with, were shining and climbing. Soon they will be directly overhead, crowning the night skies of summer. Good Bye Orion! Good Bye Stars of Winter!

Even with some light pollution but less-densely populated, we are lucky to live in such a dark area. Orion sinks into the Pacific [center left], Sirius, the brightest star we see, glows in foggy conditions [left]. Taurus and the Pleiades follow to the right. All of these are topped by the Milky Way running horizontally across the top of the photo. The orange glow of Eureka competes with the blue light from the Trinidad Head Lighthouse [on right].

Stalking the stars of the non-Hollywood type has become a lost art, something people did generations ago when light faded but they weren’t ready to climb into bed. Nowadays, we chase away the dark with our electric lights, televisions, and iPads.  The stars, and other things of the night sky, go relatively unnoticed by most. But stepping foot out onto your dark porch might just yield some startling surprises!

Of course, getting to know the night sky can be a daunting task, especially if you’re not a fan of the dark. Where to start: Constellations? The names of the brightest stars? Categories of stars? Deep space objects? It can be all a little confusing, and perhaps not that interesting at first, especially when looking with the naked eye. But give it a little time and I guarantee a few Wow!‘s will be uttered.

I suggest two places to start out, especially if you have a busy schedule. The first place is dusk [or dawn if you’re an early riser], right as the Sun is setting [or rising!]. Look to your east [west if looking during dawn], opposite of the Sun. You’ll likely first notice a pink or rose-tinted glow. This is called the ‘Belt of Venus’. It results from the red part of the light spectrum of the Sun’s light being backscattered, or bounced back toward the source, through our Earth’s atmosphere.  Those orbs you see in ‘ghost’ photographs, weather radars, and those much-loved full body scanners at airports utilize backscatter. As you watch, you’ll notice the rosy part of the sky climb higher and become fainter. Under it, you’ll see a blue arc. This arc is literally the shadow of Earth or nightfall creeping up on your location! Of course, at night, you are in Earth’s shadow. Earth is blocking the Sun from view.  But when looking at the Earth’s shadow, you’re seeing it on the atmosphere of Earth.  I suppose if we had no atmosphere, you might not see the shadow as we do currently, but I rather not see that theory ever tested out. So breathe easy and enjoy the view! 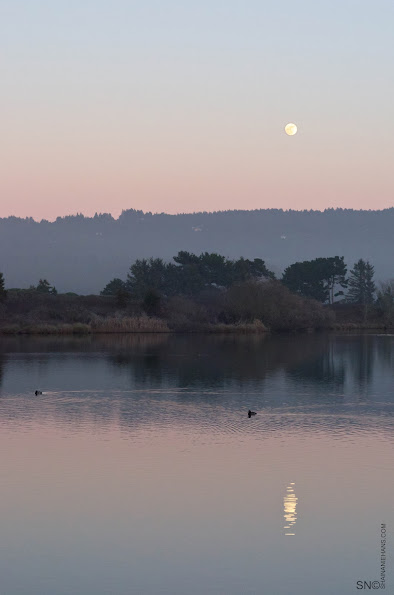 The Belt of Venus just below the smallest moon of this year. 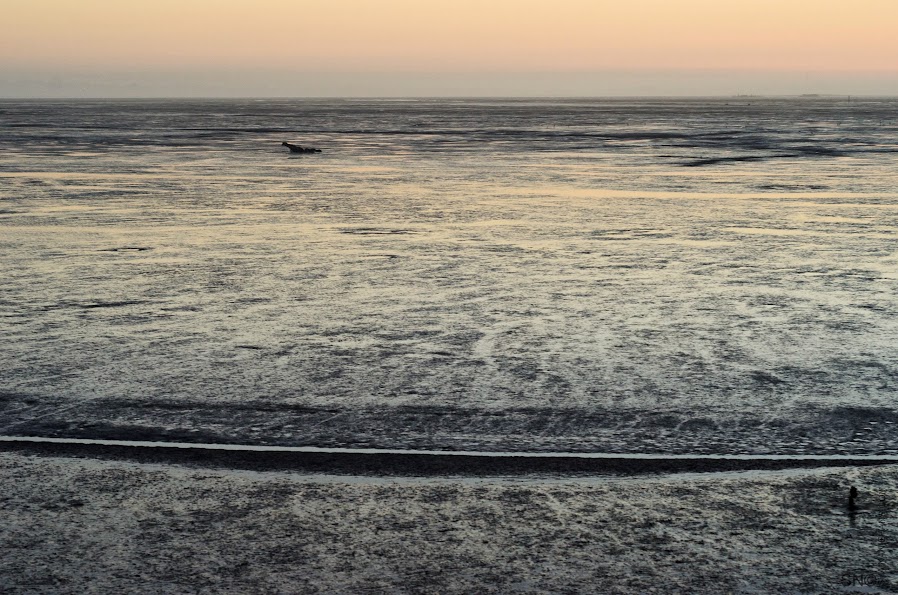 This blue line is not the shadow of Earth. It’s not arced, nor in the east. Likely it is caused by a layer of atmosphere saturated in water, like the marine layer. 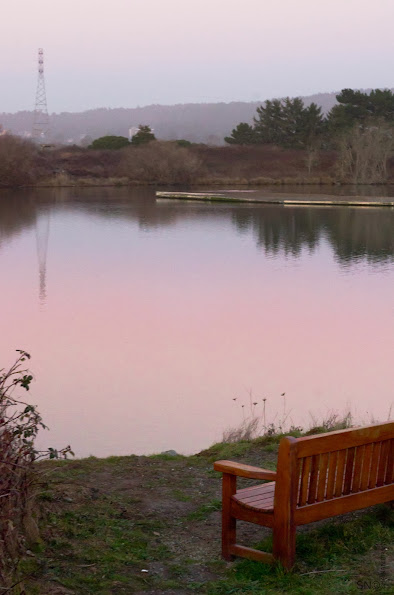 The Belt of Venus and the shadow of Earth 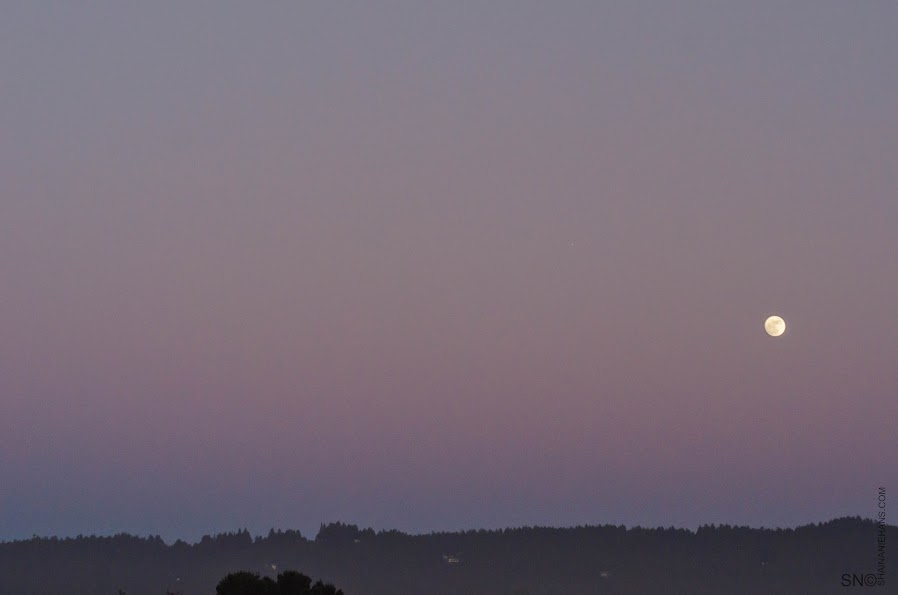 Earth’s shadow, or nightfall, winning out over the Belt of Venus

The second place to start your night sky adventures is the Moon. For many reasons. Listing them all out would use up all of the internet, so I’ll give you one or two and leave the discoveries to you. For one, the media is intensely interested in “Super Moons” right now. You can learn what that means and then snicker, content and secure with your knowledge as others hyperventilate around you and don foil hats. Secondly, life on Earth would be completely different without the Moon, so it’s many influences are worth taking note. And since the Moon is close enough to influence us like it does, it’s also easier to observe than some celestial bodies. You can use a simple telescope, the zoom on your camera, or binoculars to get a stunningly closer look. You won’t find cheese, but you’ll learn that the light and dark patches are made up of two different rock types and discover what can be found in the middle of larger craters. If detail is what you want, you could scope out your local astronomy club to see if anyone has a large telescope they’d be willing to point at the Moon, or you can head over to this website, http://featured-sites.lroc.asu.edu/, and look around at all the tracks we’ve been making in the Moon’s dust. 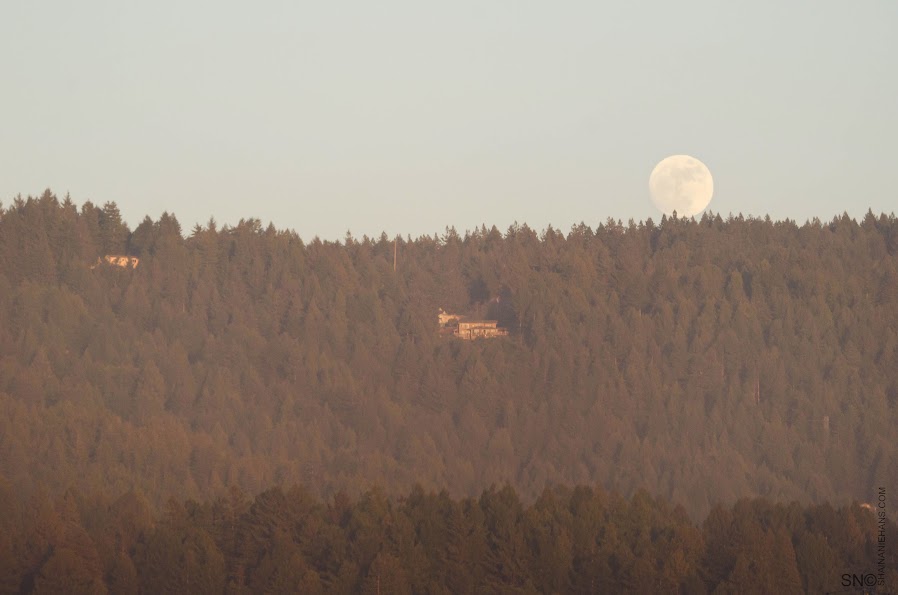 The “Mini Moon” of 2014. Otherwise known as the Moon as far away as it gets this year.

I’ve been reading a book by Richard Louv called The Nature Principle.  Louv, adamant about reconnecting society with nature, describes how our identity as people in communities, as well as individuals, isn’t just based on names of towns or states, but also the natural world that we are a part of. He starts his point with “While most of us recognize where we live by its cities, buildings, places of business, even sports teams, how many of us identify with and understand the beauty, wonder and actual functioning of the natural ecosystem which supports us, and of which we are a part?” He continues and gets to the heart of the matter: “…the natural world connects people to their authentic selves” and proclaims “You can’t know who you are until you know where you are.”

Humans love labels. We label our selves according to profession, hobbies, what we wear and eat and watch on TV, all so we can categorize each other and find like-minded individuals. But according to Louv, our picture is incomplete. We are much more than our artificially-fabricated, meticulously-crafted selves, part of us is the nature around us.  Without it, we aren’t grounded; we aren’t a part of the bigger picture.

The lamentable part is that most people will never realize that a piece of them is missing, that they are actually a part of this natural world! Louv suggests many ways to reconnect with that part of ourselves, making the book worth reading for anyone.

I haven’t lived here long, but the newness of this place has long worn off, for a while leaving me feeling blah about my surroundings. Recently, I’ve found just paying attention more has helped this reconnection. So has reading Louv’s book. I also decided to freshen my perspective by stepping out of my comfort zone and attending local walks and talks on a variety of nature-related subjects. The knowledge and passion others embody is just amazing! While I may not understand all they speak of, the new information [and new worlds!] they share helps cure the “post-newness blues” of someone who is used to moving every six months!

Below, the photos show that lately the grey skies have opened up and are showing signs of seasonal change over our heads here on the coast:

Orion, a winter constellation, is just starting its nightly trek across the sky. Here it climbs just above the horizon at midnight or so.

A sun halo in high clouds from yesterday. Oddly, the last time I photographed one, ravens flew past, too.

I know it’s not Friday, but it was when I took this shot, and I’ll be honest, I can’t wait until next Friday. I haven’t done a meme in a long time either, so maybe I’ll try this out for a while.

The Pleiades are the bright blue cluster to the left of the power pole. Seven [or eight] brighter stars can be seen, but the cluster as a whole has more than 1,000 stars in it. They are young, ~100 million years old, and currently passing through a ‘dust cloud’ that reflects their light.

Capella is a yellow star straight to the left of the Pleiades and the brightest star in this shot. While very similar to our Sun in color, this star is actually two [much more common in the universe than our single star] giant yellow stars that are nearing the end of their lives. They are older than the Pleiades at 400 million years, but only have about a tenth of the years compared to our Sun’s age.

It’s not too often, except for this summer it seems, that you can see the stars on the beach around here. The marine layer/stratus/ground fog/plain ol’ fog gets in the way most nights. Lucky for us, the haziness held off just long enough for the Milky Way to show. By the time we started to head back up the hillside, everything–including the dog, was covered in dew! Not good if you’re toting camera equipment around.

This is the Milky Way as you face south. Scorpius is to the right, including Antares, a red supergiant so large that, if it were our Sun, it would extend past Mars until almost Jupiter [in other words, we’d be toast!]. It is in the top 20 of brightest stars in our sky.