I think this is one of my favorite trees of all times. It’s in my header photo on this blog, I like it that much! The first three photos are from February 23rd of last year, so not exactly a year ago, but three cameras ago…that’s hard to believe! Anyhoo, the photos are all of the same, lovely dead tree.

Take note of that piece of bark on the right hand side as well as where the tree is on the beach.

The tree is nearly center in the photo.

Remember that piece of bark mentioned above? It looks like a bird now at the top of the branch now [just above center-left in the last shot].

Within less than a year, all the dunes around the tree have been washed away, a not so gentle reminder that life is impermanent by its very nature.  I’ll be very disappointed when I visit Folly and find the tree gone.

While barrier islands are ever-changing, this change has most likely occurred due to the jetties created outside of Charleston Harbor. While the jetties ensure a mostly calm harbor–good for shipping and commerce, they have choked off the sand deposition supply that comes from the North. Generically and very generally speaking, sediment travels from the northern end of an island to the southern end, and then on to the next island. The jetties block this flow, diverting it farther out to sea, into deeper currents and essentially causing the sand supply to Morris Island and Folly Beach to skip over them.

Not to complain, because how can you complain while living on the coast, but I seem to never catch a good, cloud-infused sunset around here!  I’ve seen two, and both have been while I was in a car going somewhere.  I’m hoping since severe weather season started this month here in SC that there will a few more cumulus in the mix.

Right now, the skies are filled with smoke from controlled burns. Here’s a smoky sunset for your enjoyment!

Sunset through the Grasses 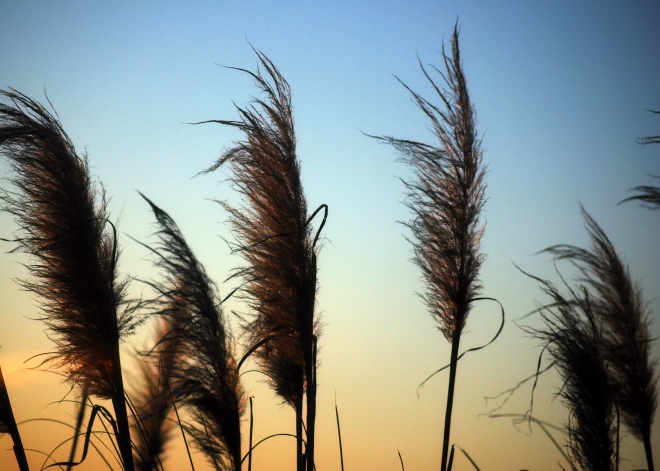 Sun lighting up the seedheads [needs to be enlarged; click on it!]

Today’s post will be a potpourri of seaside related scenes with a tinge of sepia to give it that rustic look. :)

First off is the sodium-filled topic of salt pruning.

Salt pruning occurs when ocean spray is blown onto the vegetation at the ocean side of the backbeach area.  The constant inundation of saline mist stungs the growth of the plants and makes them look like they’ve been pruned into wedge shapes, with the shorter side towards the ocean.  The photo above was taken from behind the wedges and the ocean isbehind the vegetation row.

The above picture, and the one below, were taken at Fort Moultrie.

On to the gulls.  Although this behaviour is well-documented and nothing new to those who live on the coast, if you haven’t frequented beaches, you might find this behavior new and maybe a little surprising.

Generally called shell cracking, many species of gulls engage in this behavoir, on both coasts and probably elsewhere around the world.

The article, The Developement of Shell-cracking Behavior in Herring Gulls, [PDF] observes that first year gulls don’t have the hang of shell cracking and the technique, such as height the shell is dropped from and the surface on which it’s dropped are eventually learned and perfected so that the birds don’t have to make as many drops. 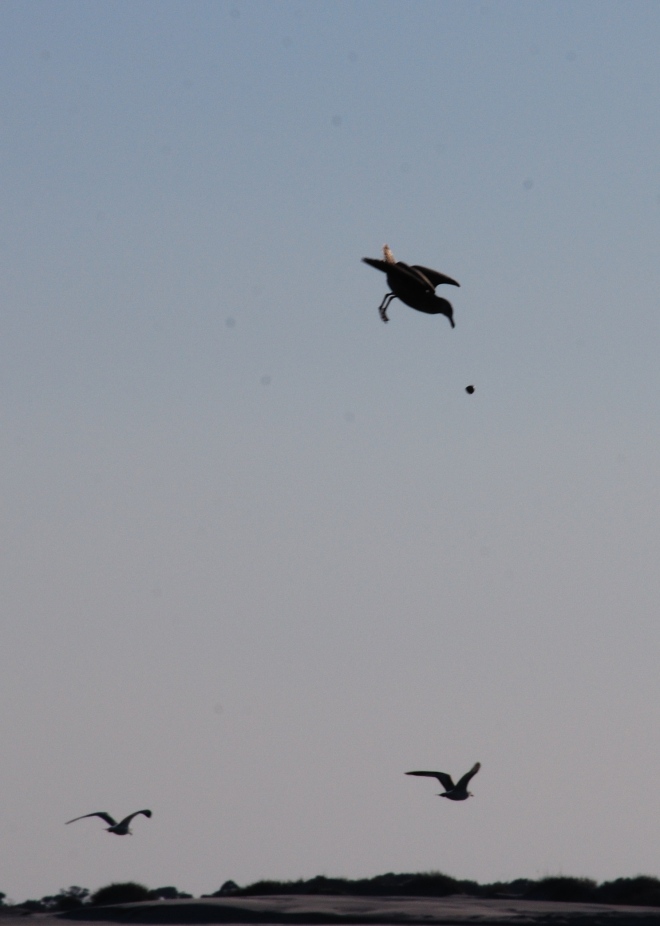 While watching the birds yesterday on the south end of Folly Beach, we saw some that just sat on the ground and dropped the shell from that height a couple times, and others that flew several dozens of feet into the air to drop their snacks.  The only problem with going so high and dropping seemed to be that other gulls had a better chance at getting a free meal.  Maybe that explains the reluctance at times to let the food fall? A couple of gulls were seen grabbing their food midair and re-releasing, sometimes repeating the process a couple times in one flight.  One herring gull, perhaps angry at a ‘flock-member’ dropped a shell right on the other gull’s back!

Trying to keep up with the falling morsel

Coming down to get the hard earned tidbit

Sometimes, it’s really hard to let your food get too far ahead of you

The gull’s food hit the water.  Wonder if that’s a harder surface than sand?

Have you ever wondered what’s under your feet when you walk on the beach? Beside the sand, of course! I guess there is a whole mirco-world down there, just waiting for you to take a peek.  And there are the things you can see easily, as well, if you just dig some. Lots of beach worms are below your feet, as well as whelks and 5 hole key-holed urchins [live sanddollars!] and ghostshrimp and crabs.  When the weather warms and my fingers won’t freeze, I’ll start digging, but for right now, I’m going to settle with what’s above the sand.

Folly Beach is a good place to collect fossilized shark teeth! Here’s an odd fact: fossils will stick to your tongue, rocks will not. Best way to get a laugh out of a group of kids is to demonstrate this!

Maybe a periscope worm tube? No one was home since it was detached from the sand.

HUGE horseshoe crab! Probably was a female by the sheer size of it.  I don’t have small feet, by the way, those are size 8 shoes! 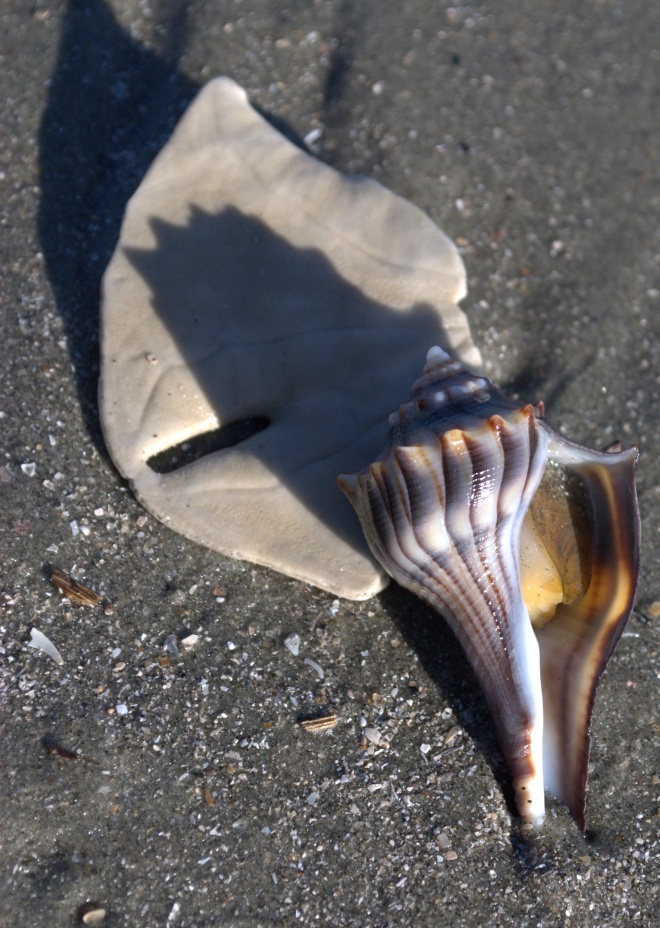 Someone is home in this whelk, so back to the ocean it went. Maybe it was trying to deposit the 50 beach cents at the bank? 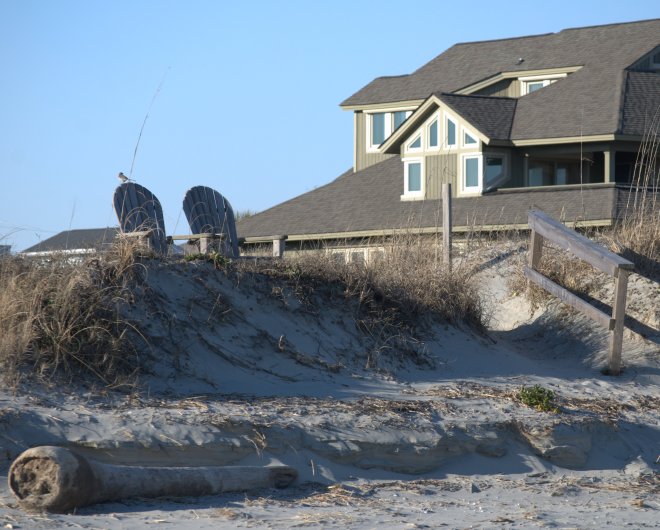 A nice place to sit on the Isle of Palms and it seems the mockingbird agrees! The mockingbirds seem a little quiet and lethargic this time of year.

By the way, if you ever want a really good, in-depth book on South Carolina’s coast, try “A Coast for All Seasons: A Naturalist’s Guide to the Coast of South Carolina” by Hayes and Michel.