And at 200 feet above sea level, three miles from the coast.

Greenery along the Redwood Creek Trail in Redwood National Park. Not the place to find large redwoods, but a mighty rough-skinned newt made an appearance. Being experts in chemical warfare, these fellows produce a potent neurotoxin.

Douglas-fir and coast redwood as the curtains, redwood forest as the stage.

Autumn around here isn’t necessarily something that leaf peepers would come flocking to, as they do in my hometown in Indiana, but the season has its own charm.

The top photo is in the “high country” around 4,640ft or so just before Devils Punchbowl in the Siskiyou Wilderness. While it’s not the most dramatic hike in regard to fall color, it is amazing for the conifers.  It almost looks like a botanical garden set in granite peaks! Somewhere around 15 or 17 species are found up here, some left from the last glaciation period. Speaking of glaciers, the little lakes up there were carved by them. Worth a visit to this sensitive area–just tread lightly!

The second photo is from [of course!] Prairie Creek Redwoods State Park. Bigleaf maples are one of the few species in the redwoods that throw color into the forest during the fall. I’d assume that the prominence of yellow is one of the reasons banana slugs might be yellow. Pity, since that crunchy yellow leaf wasn’t actually so crunchy…more on the smooshy side…[a tip if you’re like me and have to move all banana slugs off the trail–don’t use water to remove the slime off your fingers, scrape it off instead!]

You’d think with all the yellow around, people would get sick of it, but October is odd here. Along with a scattering of blue-sky days, the thickest fog comes around during this month [9 days straight of fog, 3 minutes of sunshine on the 9th day, little over an hour on the 10th day, and about a half an hour this morning, the 11th day]. The golden yellows of autumn serve to remind us that we don’t live in a world of grey tones.

I’m not sure what you think of when you think of a redwood forest, but for me, it’s the lush, Pacific Northwest version where Ewoks could plausibly roam between the six foot tall sword ferns. For a change of hiking scenery, we left the lush Endor redwoods of the north and went down to the alien landscape of the central redwood world. 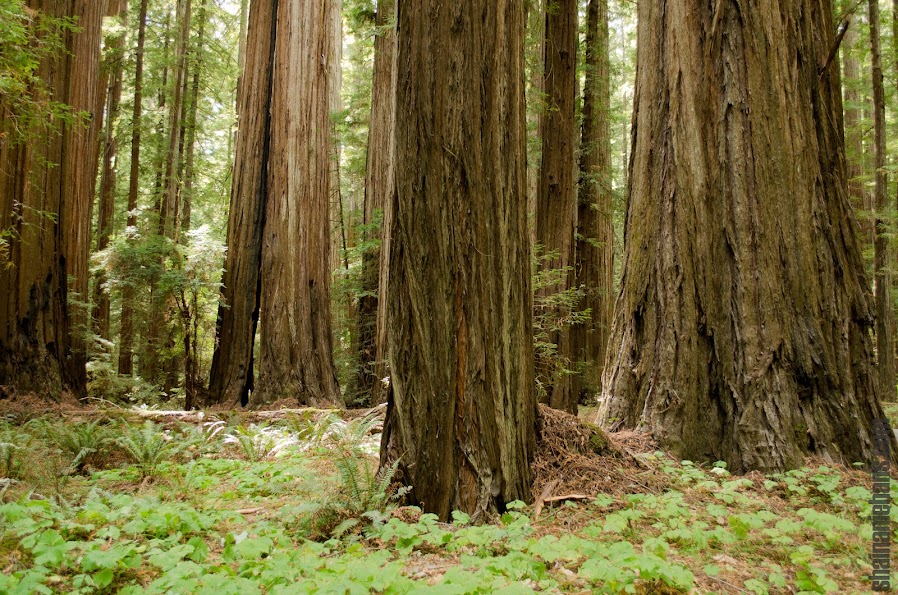 Humboldt Redwoods State Park is redwood forest, but not the redwood forest like the one that lies to the north. For one, it’s warm. And compared to the hide-and-seek the tree behemoths play in the dense northern forests, these redwoods are in plain sight, no guessing as to what might be hiding 3 feet from you, or up in the canopy.  Especially along the Bull Creek terrace, uniformly straight redwoods create a visual wall of wood, sparsely broken by the few understory plants around. While the majority of tallest redwoods are found here, only two of the 20 biggest by volume call this place home. And if you’re keeping track of redwood growth patterns at home, generally speaking, redwoods grow up first, then eventually focus on getting wider both at the base and in the canopy. 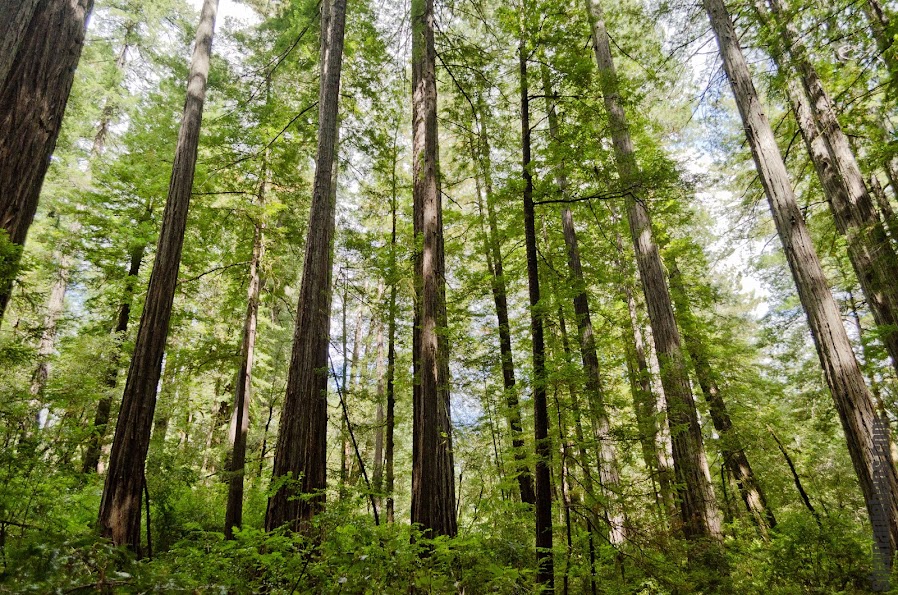 Walking the trails, we debated why these redwoods, sheltered from the brutal winds of winter storms, couldn’t be as massive and old as the redwoods to the north. Considering the drier environment, they could be decently old, but just not as wide at the base or in the crown due to smaller growth rings that come with less precipitation.  But there’s also the fact that so many of them are nearly identical in diameter, likely being close to the same age. 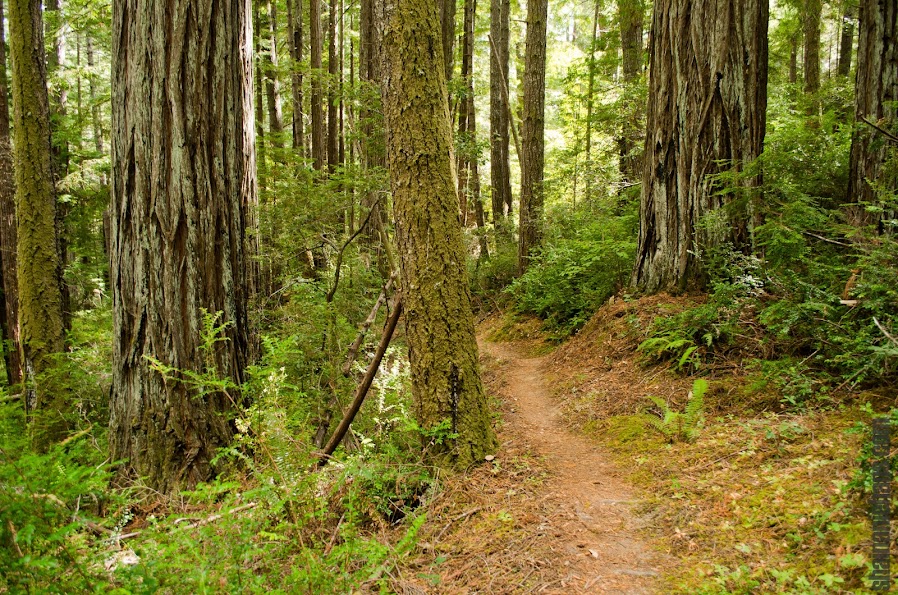 I have a theory, but nothing to back it up with besides observations. It seems that something took out all the redwoods along the creek maybe 700 or so years ago. Flood? Fire? Not sure, but the only flood references I could find were from the ’50s and ’60s. On the hillsides, it almost seems as if large fires ate away the larger redwoods, leaving the young burl sprouts that grow after the fire as markers of the massive tree that once stood. Fire and flood perhaps currently keep the largest trees from growing in this area. Considering we didn’t see any Ewoks on our hike, I guess they didn’t like living in this area either. Probably too much fur for how warm it is down there! 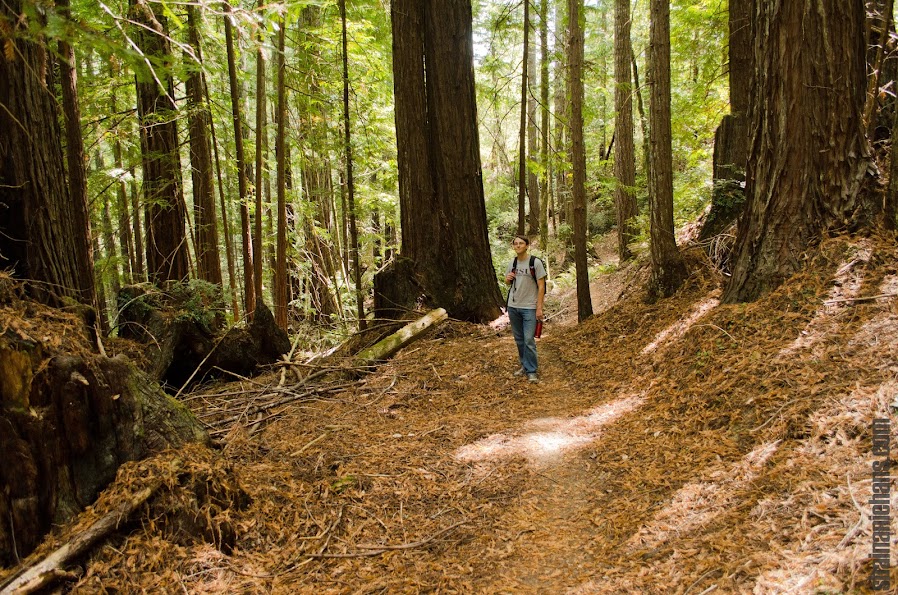 Maybe a cathedral ring? If so the parent tree, from which the smaller side trees sprouted, might have been nearly the same size as the current largest redwood. Husband used for scale. 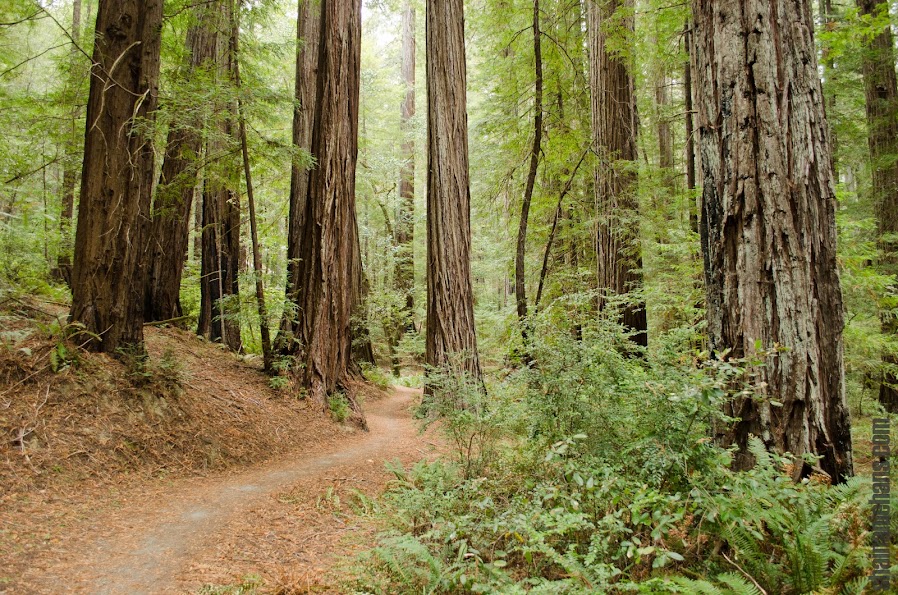 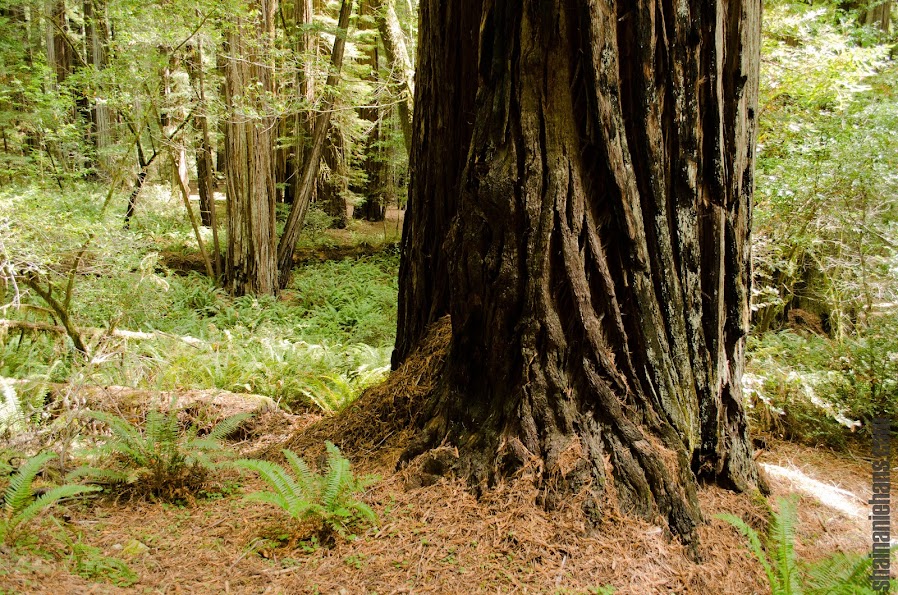 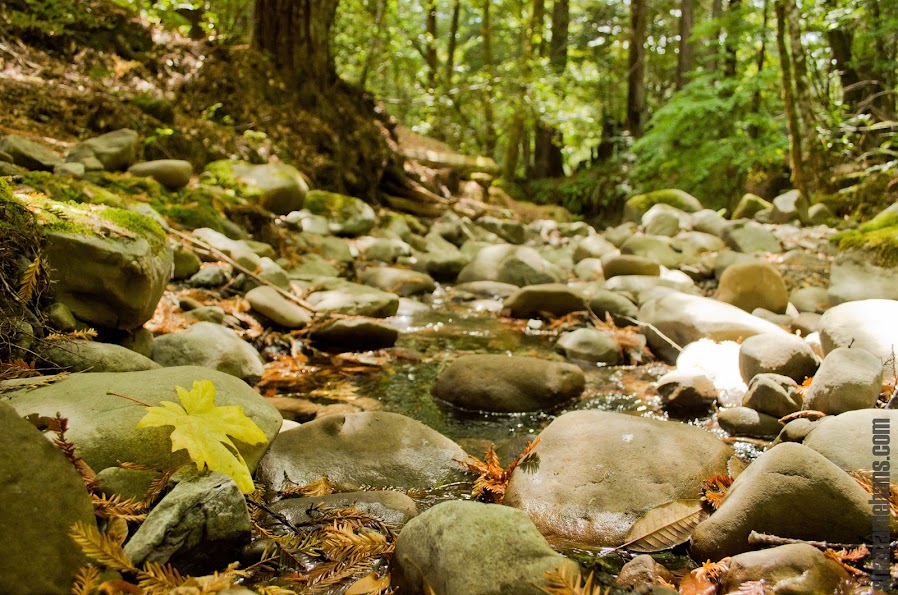