Recently, fires broke out in the mountains to our east. We debated which high vantage point to visit to see the fires, or at least the smoke and opted for the one farthest away, hoping to avoid the commotion. 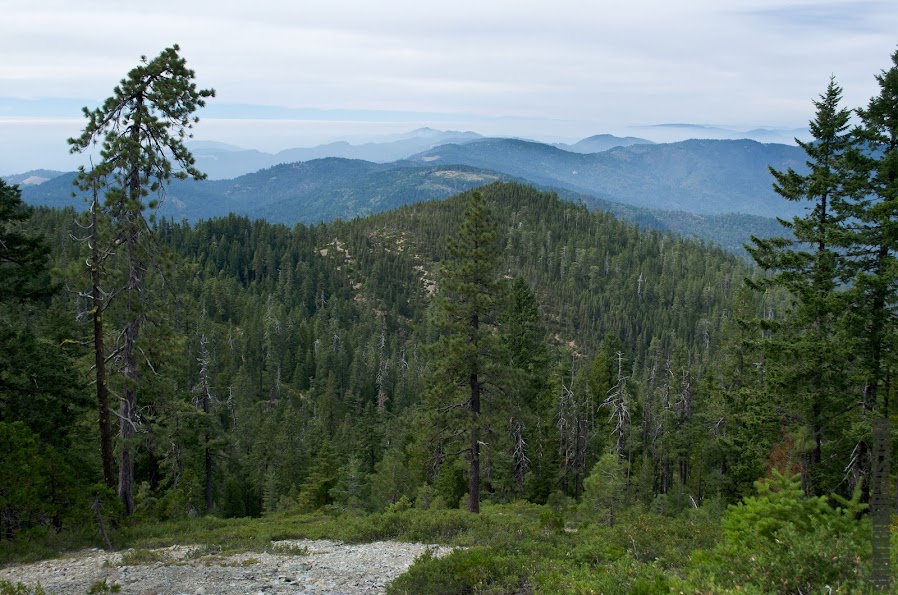 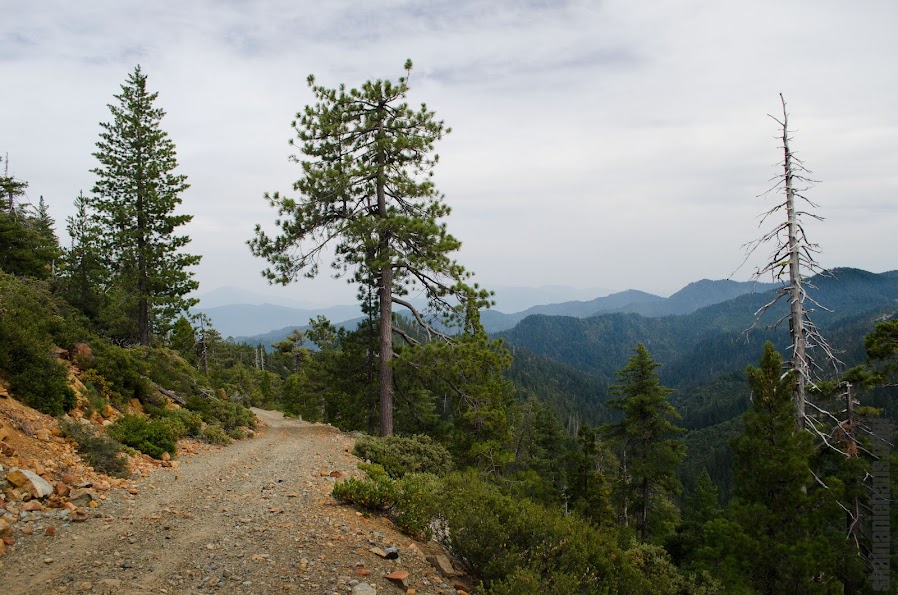 The Road Less Traveled [or less shot at]

At the top of Horse Mountain, we didn’t really have a clear view from the usual vantage points, so we trekked up a hill covered in waist-high hoary manzanita and huckleberry oak. Unfortunately, as we just crested the hill, some teenagers pulled up to our car and began their target practicing. Without a clear visual on which way they were shooting, we decided to abandon the little goat path we were on and bushwhack down to the dirt road. 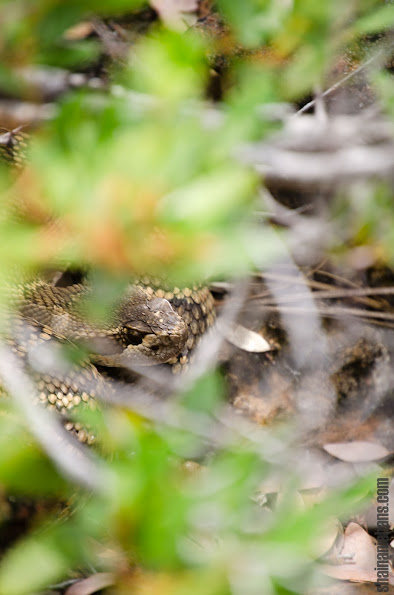 Bashing through the huckleberry oak wasn’t my favorite–too many spiderwebs [of imaginary black widows, of course], so reaching an open rocky patch was a relief. Just then, the boys with guns broke out their larger arms [a shotgun, I guess], and BOOM! My husband and I, a little PTSD-y from the last time we were shot at, ducked. To my surprise, my husband then took a flying leap, like a wide receiver catching a hail Mary. A low insect buzz accompanied the flying leap: our first meeting with Crotalus oreganus oreganus. Apparently, they don’t like loud booms and people stepping within 6 inches of them. 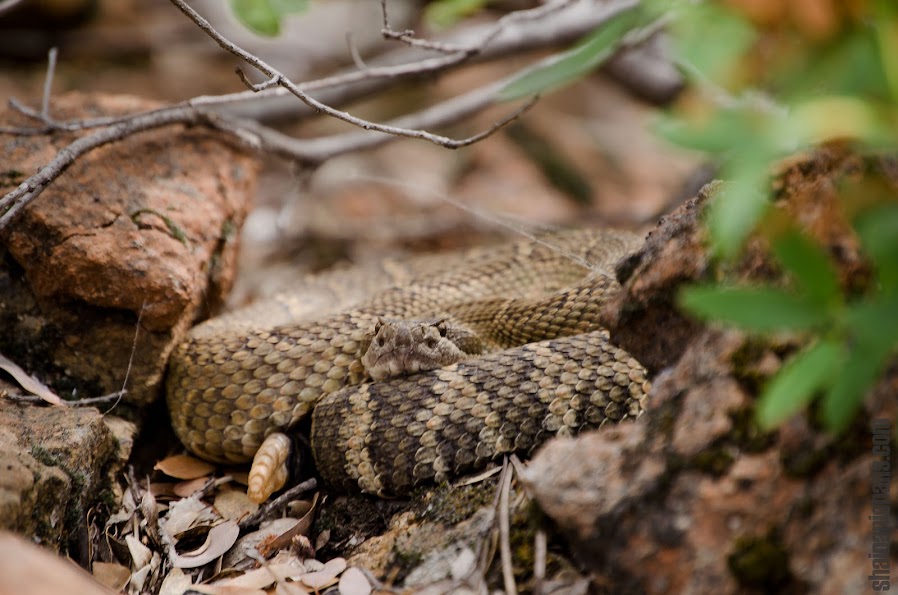 I’m not going to lie, we were both scared.  I still am not sure how scared of the snake we would have been without the pop and boom of the guns. Considering we stood in that rocky patch for quite a while with the snake pondering our options, I guess we were more worried [or at least I was] about the target-shooting teenagers and the blind approach up to them than standing within a few feet of a rattlesnake. 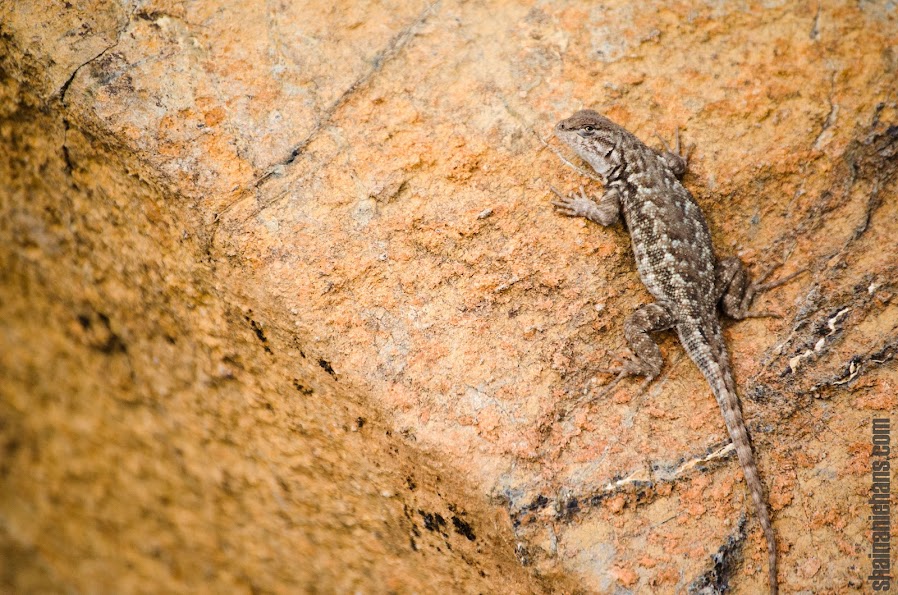 Eventually we left the rattlesnake, made it to the road, tried to get back to the car, gave up, and walked the other direction until the boys left. No holes in the car and no holes from rattlesnakes. It all worked out in the end, but I’m pretty sure my husband won’t go back until those rattlesnakes are buried under feet of snow again. 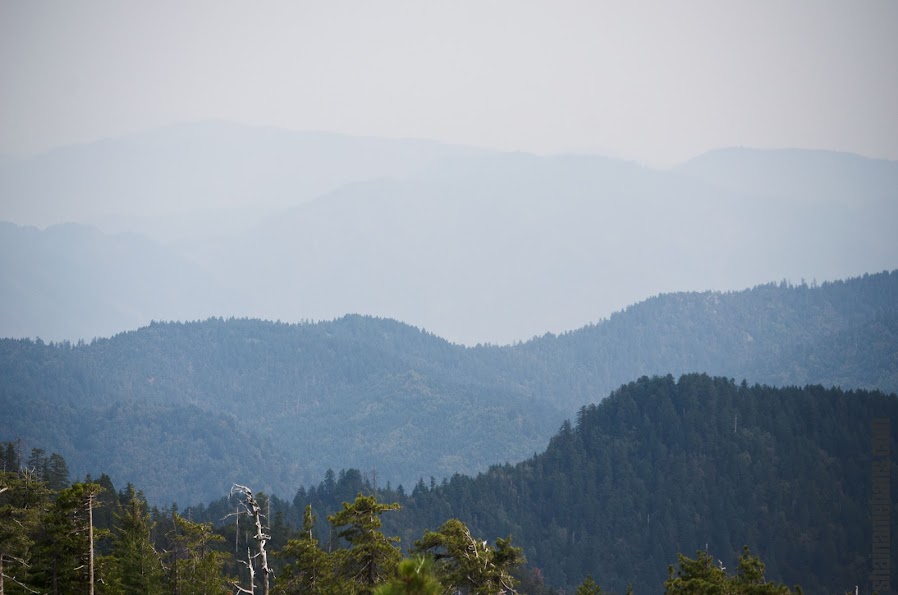 My favorite aquarium or zoo, though small, is the South Carolina Aquarium. It showcases the native animals found in the state starting in the upstate mountains all the way down to the deep ocean.  While at other aquariums you get to view exotic species you probably won’t see in your lifetime, the South Carolina Aquarium is essentially a living guidebook to the state’s flora and fauna! Not to mention, they have a touch tank!

For the month of October, the aquarium has taken on a Halloween theme called Scary’um Aquarium. It was worth the short walk through the haunted aquarium section just to see my husband jump!

I think the little slider is contemplating the solar reflection quality of the plastic tombstone in his tank.

These Yellow Rat snakes (Elaphe obsoleta) seem to be reacting to the change in temperature outside, even though they have a nice enclosure inside. The color pattern of these two is found along the Southeastern coast.

Another reptile hanging out in the aquarium, I think this fellow is the Canebrake or Timber Rattlesnake.

We caught a feeding show in the Great Ocean Tank. They have several different methods that they use to make sure the fish are fed properly and all the work is done by scuba-diving volunteers.

I mentioned above that they showcase native animals and plants, but there is an exotic swimming around. It’s the Lionfish, an invader of our coastal waters that can cause a painful wound when encountered. These fish make nice aquarium additions, until they get too large and then their owners dump them in the ocean, their ‘home’.

But back to the natives, we had walked the beach at Fort Moultrie a few days before and found stranded Cannonball jellyfish. Oddly, still clinging to the drying jellies were young Spider Crabs. Lo and behold, they are in the aquarium, too! This fellow was holding on to a Sea Nettle.

While juveniles, these crabs hang on to jellies and either eat the scraps or, creepily, eat the jellies they ride on. Another curious habit they have when young and bottom-dwelling  is placing debris on their backs.  This fellow below has used some seawhip as camouflage.

And finally, the biggest treat of our visit was meeting Phoenix! She’s an American Kestrel that met an uninsulated powerline. While lucky to be found, she lost most of her talons and is incapable of catching prey.

We noticed her beak immediately and asked if it was due to her trauma, but as it turns out, Kestrels have irregular beaks with a sharp protrusion called a ‘tominal tooth’ to puncture the spinal cords of small animals. Another neat adaptation they have is the black spotting on the back of their heads said to resemble eyespots and fool would-be attackers. A very neat, attitude-filled bird!

I’ll admit it: like so many others, my stupidity almost landed me a rattlesnake bite!

It was dark, the snake was crossing the road.  I hopped out of the car and took a couple pictures, but I made one bad assumption: I thought he had been hit.  In a split second, the snake I was leaning over flipped himself in the opposite direction and was poised to strike.  He could have hit me if I were a few inches closer.  That is one story a ranger would never want to share!

The one that almost got me!

Rattlesnakes are unique due to their capability to actually warn and alert creatures when they are too close.  They most likely developed this adaptation in response to living with large creatures like bison and crafty predators such as coyotes.  If they have this built-in warning system then why do bites on humans occur?

Sometimes snakes, just like us, make mistakes.  Since they are reptiles, they may be too cold to react fast enough to rattle before the shoe comes down.  They might confuse your hand, or even leg, for prey.

With the prairie rattlesnake, younger snakes are often more aggressive and less predictable.  Something that wouldn’t even make an older rattlesnake flinch could possibly cause a rapid, fang-filled response in a young snake.  Quite often, too, the youngsters will strike multiple times.

Unfortunately, there are often more factors involved on the human side of a snake-human encounter and two primary factors are blood-alcohol levels and gender.  In fact, if you are a male that is between the ages of 20 and 40 and you’ve had anything to drink, STAY AWAY from any snakes.  These fellows fall into the category of ‘most often bitten’.

In my case, I assumed the snake was dead.  I’ve picked up dead snakes, pushed snakes off the road with snow poles, picked them up with long sticks, but if there isn’t blood and the skin isn’t hanging loose, it’s not a safe snake to handle with your hands!  I thought the snake was dead because he was flat-ish and in the dark I imagined tire marks.

So what happens when you encounter a rattlesnake?  What should you do?

When a rattlesnake notices your presence, he’s going to do one of three things: Freeze, flee, or coil.  [**DISCLAIMER BELOW!]

If he freezes, don’t assume he’s sleeping.  He’s just hoping his camoflauge is working. If he is flattened, he knows you are there, and he’s trying to look bigger.  Keep your distance.  Rattlesnakes can strike half the distance of their body in general.  Slowly walk away from the snake.  That’s that!

If the snake flees, do not persue him.  But you need to keep in mind that rattlesnakes have tiny brains.  If his place of refuge is behind you, he’s going to come your way!  Get out of the way!!!  And never approach a coiled snake!

If the snake coils, slowly and as quietly as possible back away. He will most likely be flattened out as well.  He’s trying to not escalate to any contact by looking big and putting on a terrifying display.  The ‘experts’ recommend not to run, due to the fact that, if this encounter is happening during the spring, you may be near a den and another snake could be near by!  If you are dangerously close to the snake, within half the length of his body, hold still.  Most snakes do not want to waste their vemon on something they can’t eat and they know we aren’t dinner.  Just a note, snakes HATE dust kicked in their eyes, since they can’t blink it out–no eyelids!

**Alright, now that I’ve said all this, nothing is 100% fool-proof.  It really all depends on the snake’s personality.  The best prevention is to be aware of where you place your feet and hands and to respect the snake–don’t approach him and he’ll leave you alone!  They are very neat and interesting creatures to observe and they give us a unique nature experience and thrill, so respect their place and they’ll gladly leave you alone!  They are just big chickens with venom and fangs!

He wasn’t happy I picked him up with a stick, but it was better than becoming a tire pancake!  He probably wasn’t happy I was still there taking a picture, either!

I found a couple rattlesnakes the other day and moved them off the road.  Of course, when a ranger and a rattlesnake are in the middle of the road, traffic stops.  I did manage to find some snakes without attracting crowds, so I got some really nice pictures.  From the looks of it, the snakes weren’t very appreciative of my efforts, but oh well.  Hopefully they made it to their hibernation dens before the cold came again.  Who would have thought that they use the same hibernation den for all of their lives?  And that the mothers pass it on to the young?  That’s a lot of snakes in one place!

For more sepias, go to: